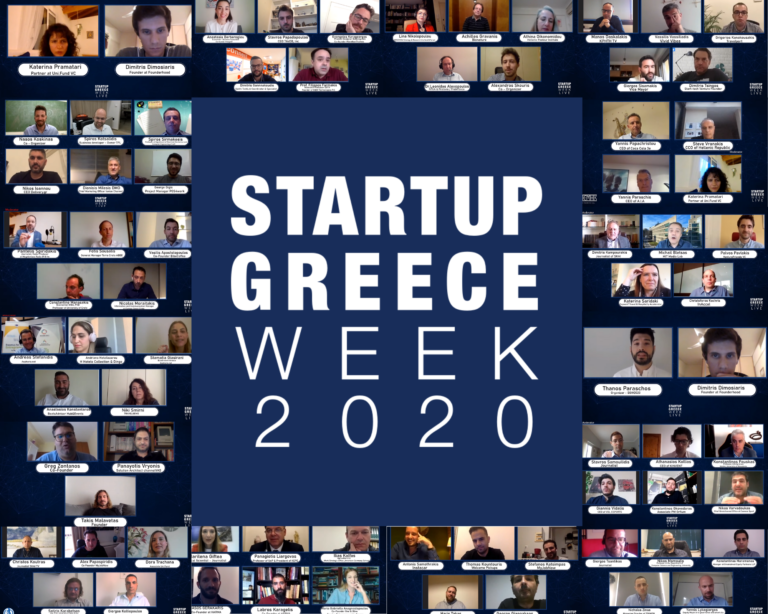 For the 5th consecutive year, the Hellenic Week of Innovation and Entrepreneurship took place, this time was 100% online having tremendous acceptance across Greeks both all over Greece and of diaspora. In total 126 renowned speakers participated in 52 hours of live streaming show with reach over 1.000.000 people from around the world, out of whom 20% estimated were Greek expatriates.

This action was an initiative of the Non-Profit Organization Youth Entrepreneurship Club in the framework to contribute to the development of the innovative business ecosystem of Greece.

Well-known entrepreneurs, startuppers, investors, academics that thrive abroad, representatives of the politic scene, and many people supported this actions sending a direct message to all of us: The crisis of coronavirus brought new data to our country and the whole world, it reversed chronic and consolidated perceptions that they were negatively positioned towards entrepreneurship, promoted the technology and gave distinct/leading role towards this action and boost the business initiatives

Startup Greece Week was held under the auspices of the Ministry of Development and Investment at the Ministry of Digital Government. It is admirable that this initiative was organised and produced 60 and more volunteers, with an average age of 23 years!

Greeks desire to innovate and to venture despite the obstacles that our country is facing. The Greek Week for Startups raised awareness, inspired and mobilised the public to materialise every business idea into action. Numerous actions showed every aspect of the business, whether positive or negative, raising important issues of the present and the future.

The audience had the opportunity to participate in 21 industrial workshops, optimised for the need of the business world, featuring and evolving the existing knowledge and skills of each participant. The 6 industrial sessions inspired the audience from the examples of the speakers who participated in the discussion. More specifically, the sessions were: Biotech/Healthtech, Logistics – On-demand delivery, Investor’s session, There is no such a thing as a failure, GM/CEO/CCO, Startup Awards.

With the assistance of 10 cities across Greece, 10 industrial sessions were conducted through which the tracking of the problems from each region and the encouragement of the local communities to attempt and connect with their ubiquitous fellow citizens was achieved. The ultimate goal was to suggest proposals for the development of the local ecosystem, as well as to solve essential problems caused or will be caused by the pandemic. The cities that participated in the event were Thessaloniki, Chania, Rethymno, Heraklion, Tripoli, Rhodes, Xanthi, Ioannina, Kalamata, and Patras. (The corresponding Municipality/Region provides its auspices to the initiative)

A common denominator for all the discussion was failure as a necessary condition for success, as well as the adaptability. This vital requirement should characterise all entrepreneurs and employees. Particular emphasis was placed on the thematic section “There is no such a thing as a failure”.

In the first industrial session “Logistics & On-Demand delivery” emphasised on the online orders and services. A domain that has grown rapidly due to the pandemic situation and has become an inextricable part of our daily life. Emphasis was placed on the respect they should be given to employees that conduct the ‘last mile’ delivery.

In the second industrial session, Biotech-Healthtech the audience was excited asking a plethora of questions to the speakers. The conclusion was very clear: Pandemic creates problems but at the same time, brings out opportunities that rise the cause of cooperation and collaboration among business individuals.

Regarding the subjects discussed in the city session of Chania, the role of the educational system was considered as a controversial issue.  Mr. Bletsas, who is Researcher and Director of Informatics at MIT’s Media Lab, strictly highlighted that the big problem is located to the current educational system. It destroys the children’s adaptability when the system calls them to decide at the age of 17 with which profession want to occupy themselves in the future. All the speakers pointed out that the cooperation and the linkage between the academics and the business sector are essential.

Thessaloniki’s session highlighted the problem of focusing on financing the market instead of the client. The city’s ecosystem characterised united, while pandemic, despite the economic clout towards every business, allowed the companies to redefine their sales strategy, understanding further their clients’ needs.

Kalamata’s city revealed the appreciation of Greek products abroad, as well as the differentiation that exists in comparison to the competition. The agri-food sector and the producers owe to familiarise with the technology to receive fastest and profitable results.

Xanthi’s city session points out the environment and the legal framework that must be optimised, and to reduce the bureaucracy significantly. Emphasis was also placed on the importance of faith, hard work, dedication, perseverance, and boldness to reach the embodiment and success of one’s idea.

The audience was surprised by the perspective that was placed on the table from the city session of tourism of the Rhodes island, “the alternative tourism will arrive faster than we expected in Greece. The new traveller will be a traveller with a purpose. The tourist will know exactly what desires, and one will want to evolve. Vital importance is the exploitation of the natural environment that lavishly exists in Greece”. The touristic sector must alter the threats into opportunities!

Grigoris Kanakousakis from Dubai, the speaker at the city session of Heraklion, focused on the future of tourism and transportation, we owe to cover the needs of the ‘smart traveller’ of 2020. The technological aspect could not be omitted from this section. Digital transformation is not about technology but specifically the individual and the crisis that created opportunities so that “Greece can travel everywhere abroad” through the plethora of tools in alternative tourism.

It is essential for a company to be updated with the events that happen in the market so that it can continuously improve its internal process to become competitive; this was stated in Patra’s city session. Mr. Milesis from IONIAN TV noted that every organism must possess values and visions that will contribute to companies’ success.

Tripolis’ session emphasized the digital transformations, an important step for the development of the local ecosystem, but at the same time, the relocation of youth from the city to the rural area. Unquestionably, the quality of life is better in the countryside; thus, it needs to be protected from the internet invasion, resulting in the creation of local communities.

The discussion plays a vital role in the development of a business idea, as mentioned in the industrial session of Rethymno. The team is crucial for the path of a company and ought to foster cultural behaviour. The entrepreneurial ideas must be closely linked with the market need having a social and environmental impact. Innovation is not only directed and linked with technology! The Greek economy combines two fundamental pillars, the agro-food and the tourism. With those two pillars could generate ideas that will bring the change in the financial data of our country.

The highest acceptance from the audience received the session with the GM/CEO & CCO coordinated by Mrs. Katerina Pramatari Partner to Unifund, participants Steve Vranakis CCO of the Greek Government, Yiannis Paraschis CEO of the Athens International Airport and Yiannis Papachristos General Director of Greece-Cyprus of Coca-cola tria epsilon. Remarkable was the observation that the new generation fosters “behaviour thinking”, that prepares it to integrate with the entrepreneurship field and to create new jobs. Mr. Papachristos added that the business market is being reshaped and this transformation favours the collaboration among big corporations and independent entrepreneurs. There is an urgent need for soft skills (adaptability, collaboration and composition) and the awareness that decision making affects only one life period of each young individual and it is not defining for all the years of professional and personal development.

Following there was a brief discussion with Mrs. Pramatari who spoke for the importance of investment in startups that derived from Greek Universities and Mr Dimitris Dimosiaris announced the winners of the big competition STARTUP GREECE WEEK AWARDS 2020, who gave the chance to the ambitious young entrepreneurs to present their ideas, to be evaluated from the audience and the jury and 5 of them to share their prices worth 10.000+ euros!

Just before closing, the organiser of Startup Greece Week, Thanos Paraschos stated: “ I am proud of the imprint our initiative project leaves. I am greatly optimistic about the future of the digital nation, since the Greeks all over the world take a shot in the field of the tech companies or they are part of the ecosystem showed that they want to collaborate, they are ready to invest and have perseverance and determination to excel in global scale!”

The Greek Week of Innovation and Entrepreneurship closed in the most pleasant way, with #live party form the Guest DJs (Asterios Haritos, Miltos Psirogiannis) who entertained the public. The most fun online party that has ever happened for Greek standards could not be missed after 45 consecutive days full of constructive 100% virtual, pre-events, city sessions, industry-specific sessions & workshops, platforms & social media content.

Startup Greece Week 2020 team, proved that despite the unique and challenging situation that we are experiencing, there is hope for personal and business improvement and development. The crisis gives the motive for social change and people unity. Thus, if people would like to connect, to network, and to broaden their contacts, one thing you can do is to connect to the Startup Greece Week network 2020 on Viber here.

Special thanks to our 76 supporters of our initiative:

Close Menu
We use cookies to ensure that we give you the best experience on our website. If you continue to use this site we will assume that you are happy with it.Ok